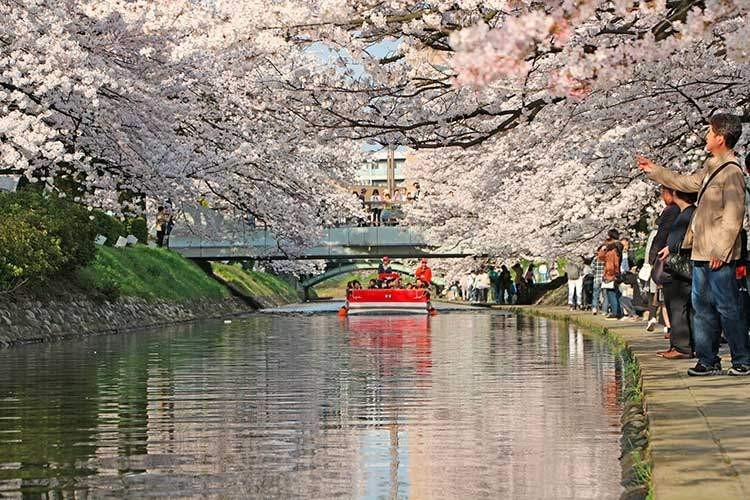 On your left, you will see the area where the Toyama castle used to be during the Edo period.
The first castle was built over 470 years ago, and the last lord was the Maeda clan.
Today, this area is known as the TOYAMA castle park. 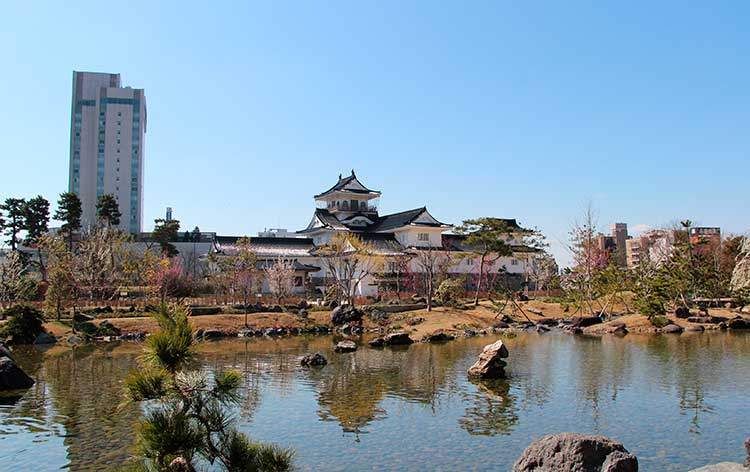 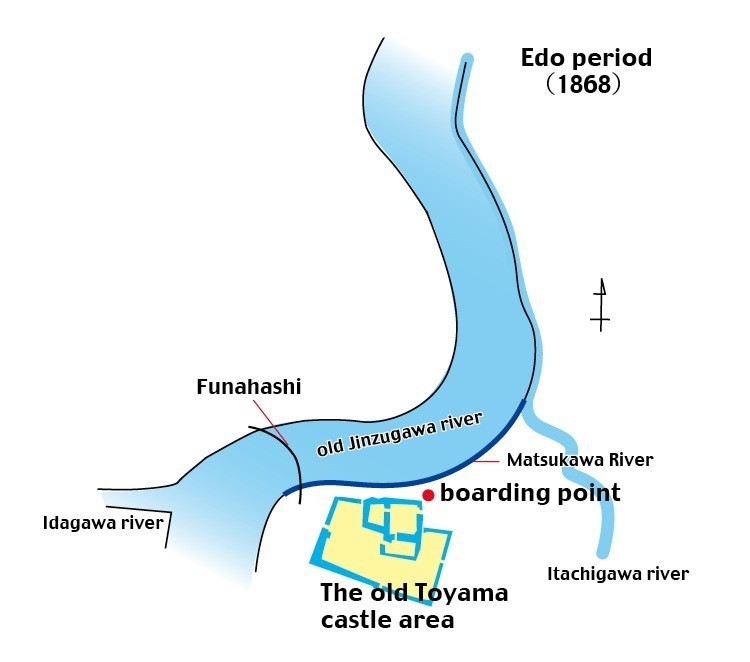 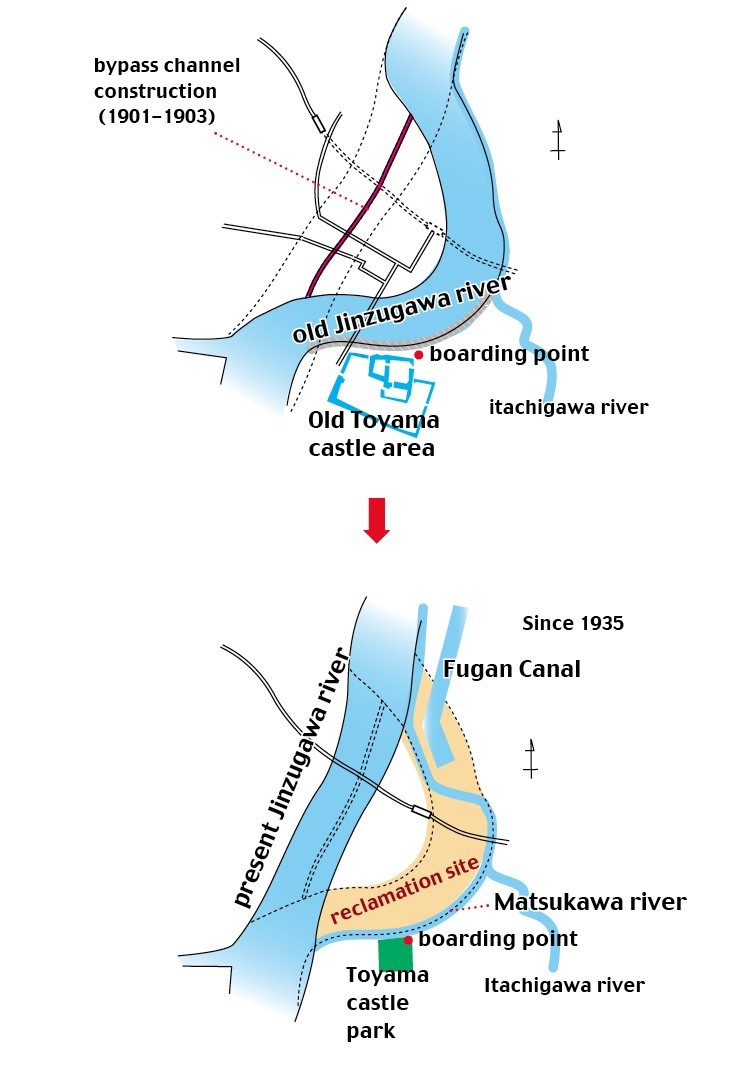 Look at the riverside. Most of the trees you see are cherry trees.
There are about 460 cherry trees lining the Matsukawa river.
This place is very famous for its beautiful tunnel of cherry blossoms.
The cherry blossoms usually bloom at the beginning of April. 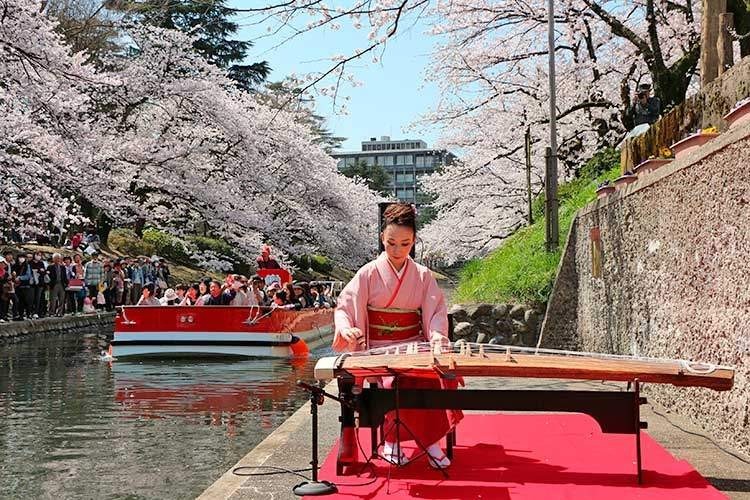 *KEIUN BRIDGE
The pond is a vestige of the inner moat of the Toyama castle, and you can see a lot of colored carp swimming. 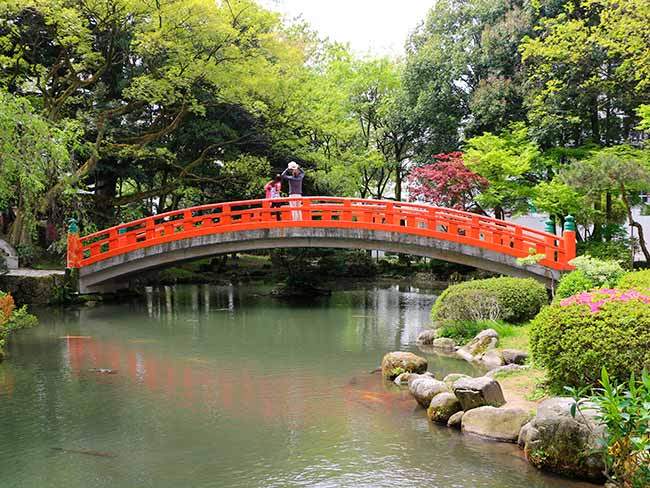 *SHICHIJYUNIHOBASHI BRIDGE
In old times, people could appreciate the 72 peaks of the Tateyama range from here.
This is why they named this Shichijyunihobashi.(Shichijyuni is 72) 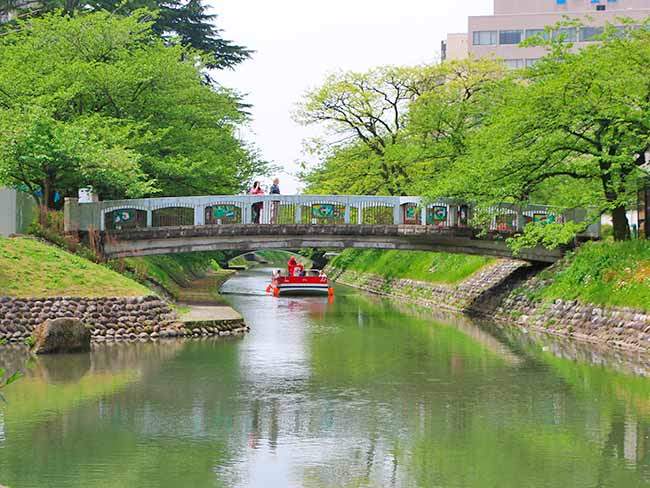 *AZUMI BRIDGE
As the Toyama castle was also called the “Azumi castle,” people called this bridge the Azumi Bridge. 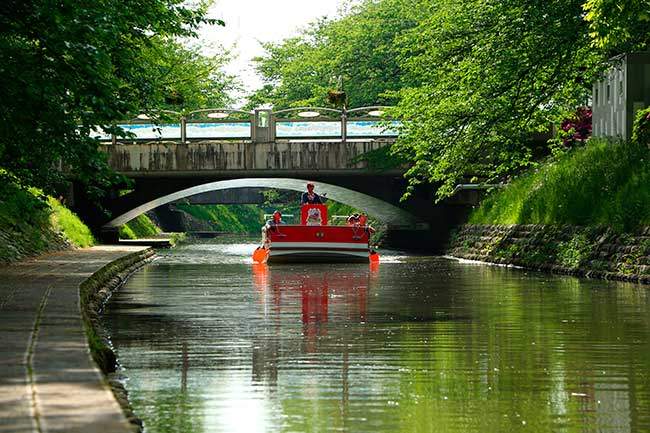 Look at the red signboard on the top of the building over there.
It’s a Masunosushi shop.
Sushi is a traditional Japanese food.
Masu is trout.
We say Masunosushi or Masuzushi. It is one of Toyama’s most famous local foods. 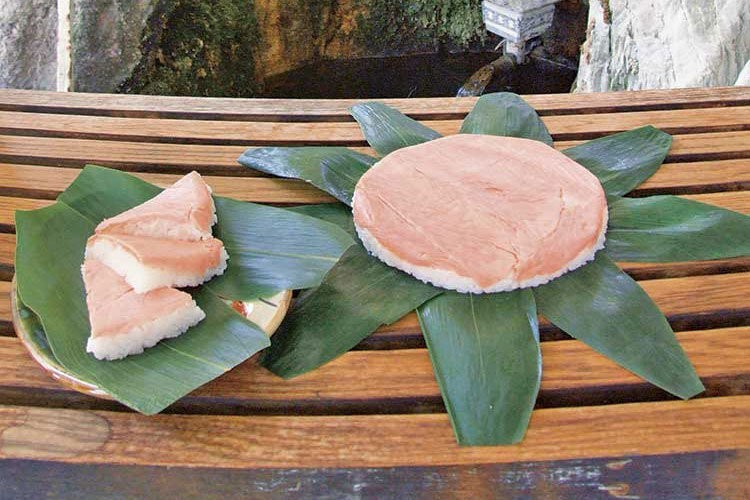 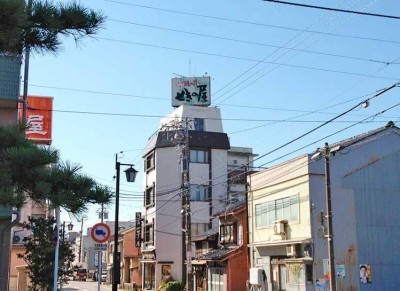 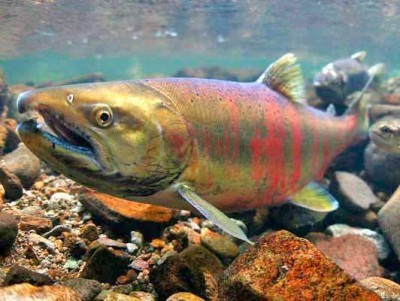 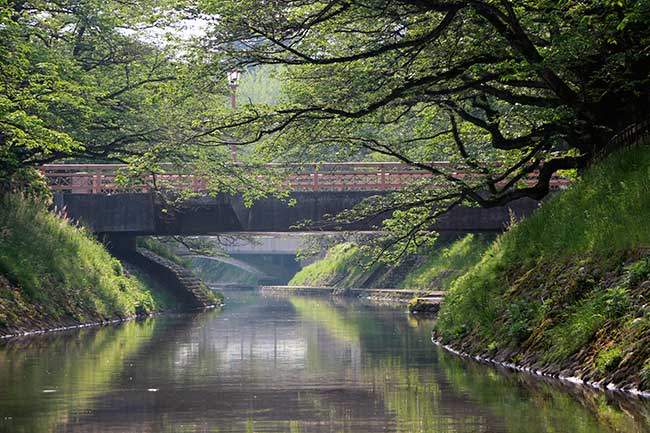 This is the FUNAHASHI, a vestige of the biggest floating bridge in Japan. They Night-Light tied up a maximum of 64 pontoons.
Until 1882, the floating bridge spanned the Jinzugawa river. Each bow and each stern were tied up with iron chain.
Many planks on which people walked were laid across the boats.
It is said that some people fell off the floating bridge. 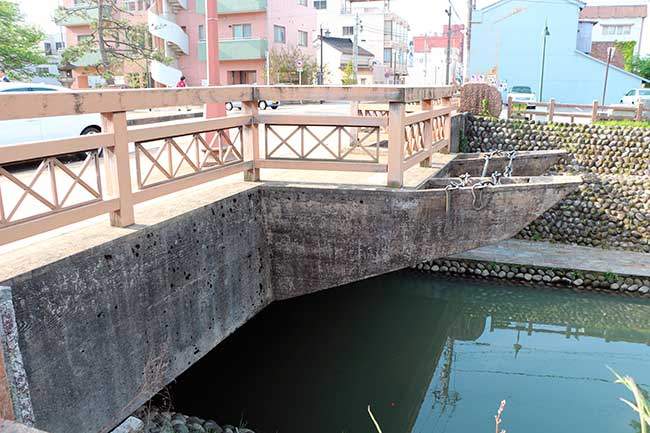 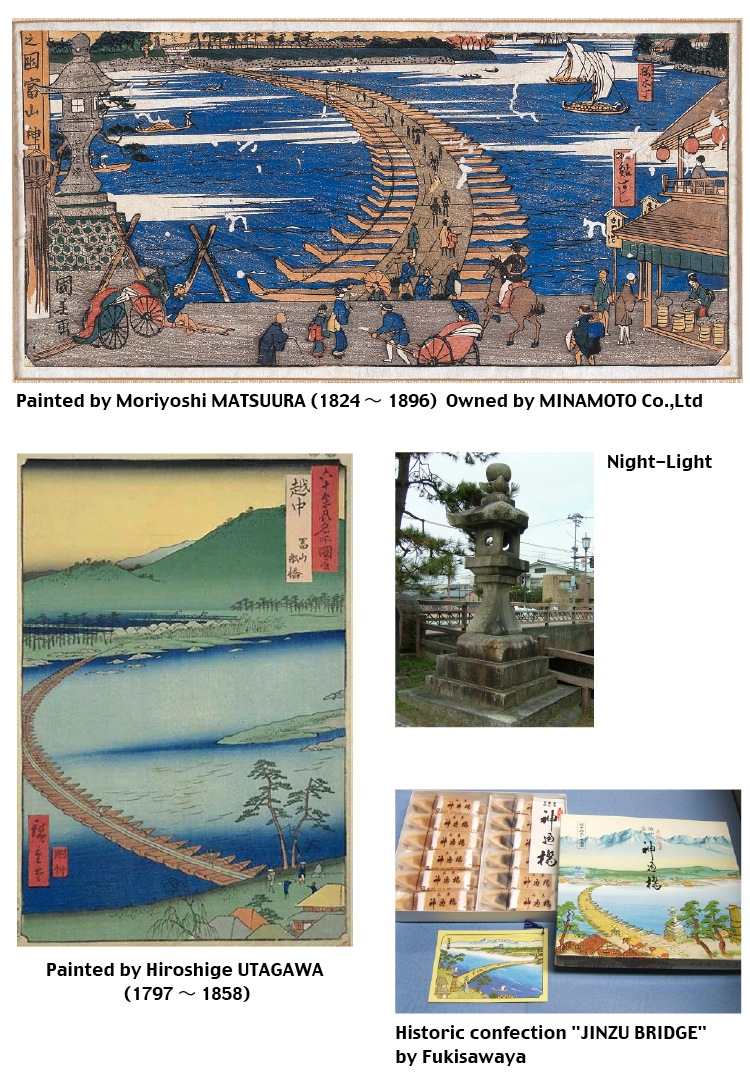 This piece of music “Kojo no Tsuki,” which means “The Moon over the Ruined Castle” in English, is one of the most famous pieces in Japan composed by Rentaro Taki in 1901.
He was the first Japanese person to compose western music.
In his childhood, he lived near here for about 2 years (1886-1888). 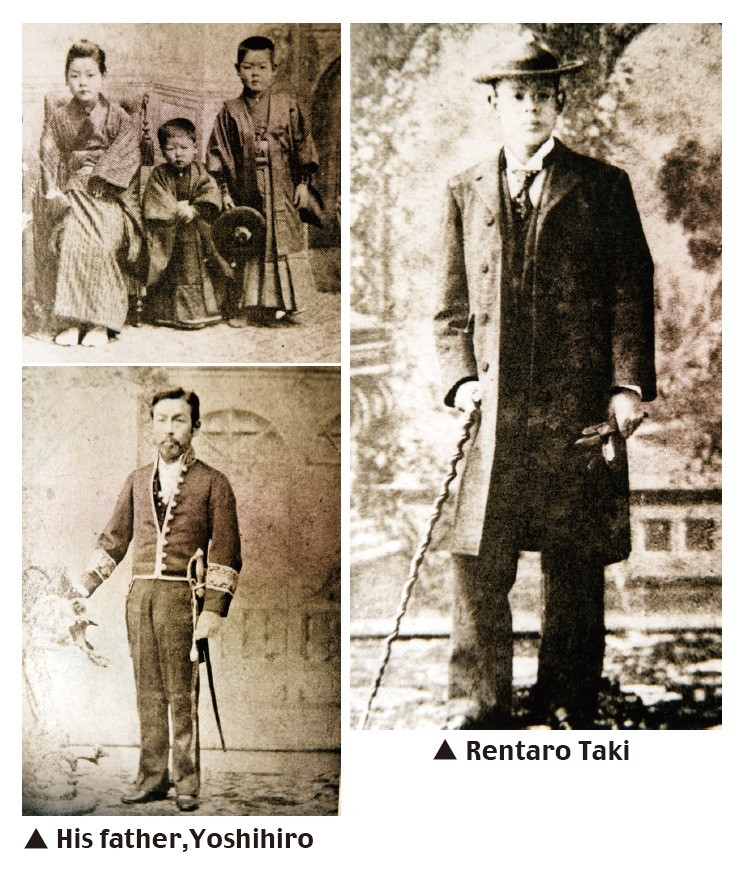 The front side of TOYAMA Prefectural Office 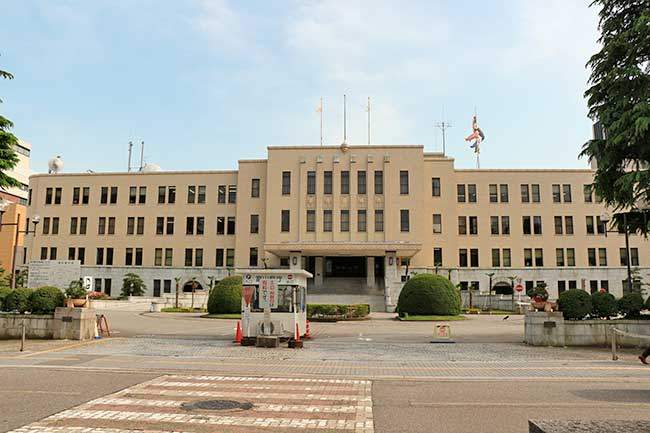 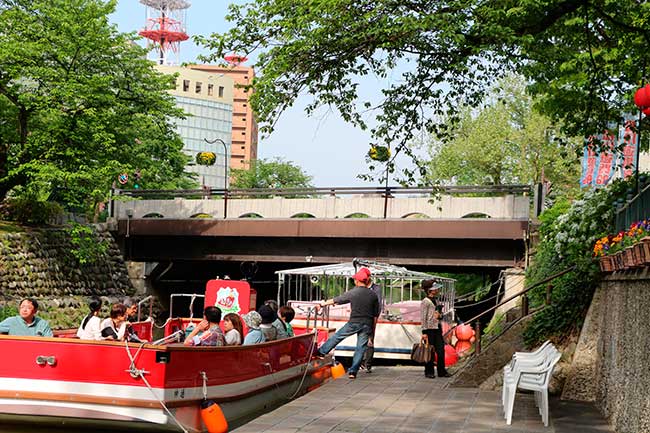 Look to your left. This is the Toyama city office.
The construction was completed in May 1991.
It has an observation tower, and the admission is free.
420,000 people live in Toyama city. 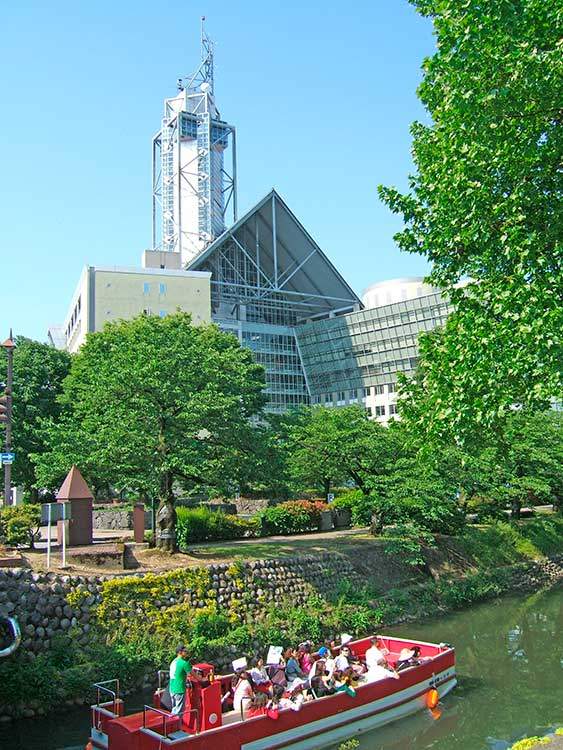 ＊Observation Tower Information
The deck is 70 meters high, and you can enjoy a 360-degree panoramic
view. If the weather is nice, you can appreciate the beautiful Tateyama
range. (Admission free) 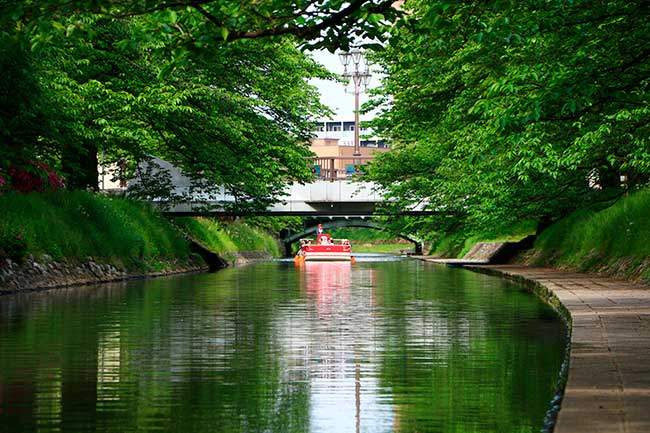 The Sakura Bridge was named after the beautiful cherry trees lining the river.
It was built in 1935.
It was designated as a tangible cultural asset in 1999. Now we are returning to the boarding point.
Look to your left. It is the ITACHIGAWA river.
Itachi means weasel.
Weasels used to live nearby the river.
A long time ago, there was a river port called “Kimachi no Hama” right here.
There were a lot of warehouses around here, and it is said that there were about 130 barges which went to and from the estuary. 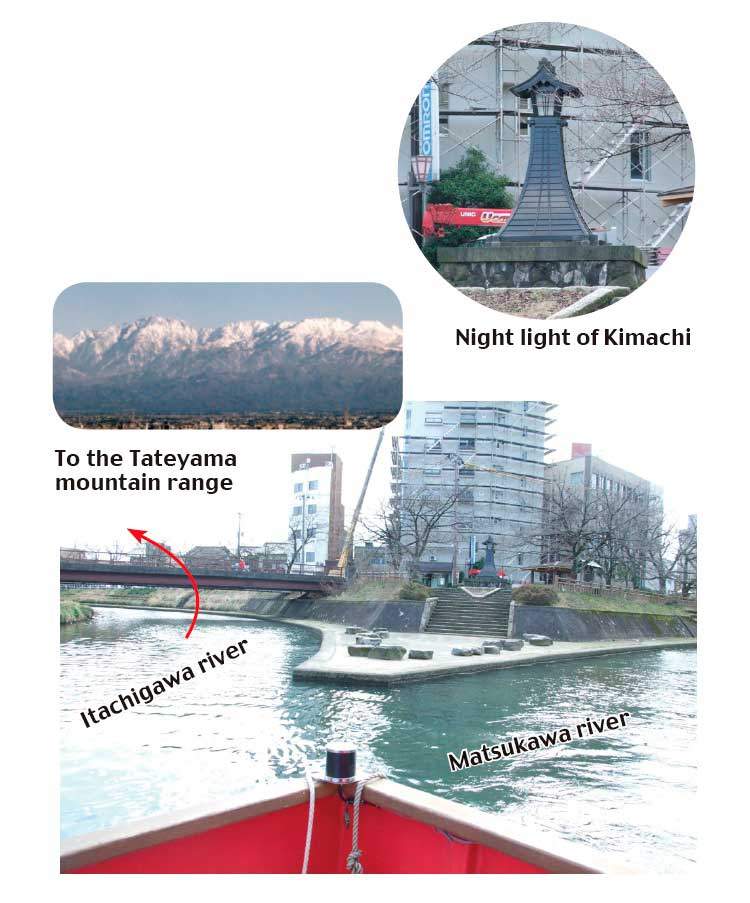 ⑪ Wildlife around the Matsukawa river

Many kinds of fish live in this river.

The huge fish are carp. They are edible and delicious.
You can have them as sashimi or cooked in miso soup.
Most of the small fishes are minnows.
Minnows don’t taste that good.
Various kinds of birds living around here. 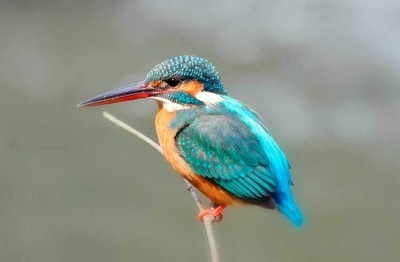 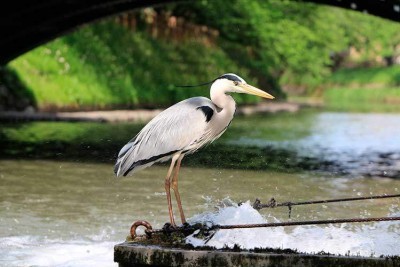 The park has 28 sculptures which are placed along the riverside of the Matsukawa river.
They were made by artists who were born or live/lived in Toyama.

The building with the red triangular roof is the Hokuriku branch office of SATO KOGYO CO,LTD., a major construction firm in Japan founded in Toyama. SATO KOGYO CO,LTD. is skillful at flood control works and tunnel digging. The company appeared both in the movie “The Sun of Kurobe” which depicted how people struggled in the construction of the Kurobe Dam, one of the most difficult projects in Japan, and in the novel “High-Thermal Tunnel.” Established in
1862, SATO KOGYO CO,LTD. has significantly contributed to the modernization of Toyama. Its headquarters is in Nihonbashi, Tokyo.